Executive Summary: The National Preventative Health Taskforce’s Discussion Paper: a) downplays the positive role individual choices can play in the health sphere, b) pays little attention to the rights of individuals to consume legal products of their choosing, and for commercial vendors to provide consumers with those legal products, c) fails to interrogate the extent to which the management of individual risk should be appropriated by the state, d) neglects to properly assess the evidence base of its policy prescriptions, and e) presents policies that fail to live up to the framework of evidence-based public policy. 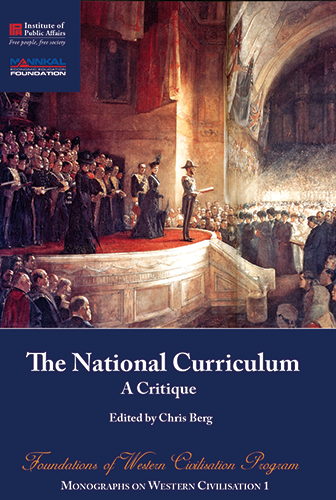 The legacy of Western Civilisation is rich, complex and essential – the foundations on which Australia’s society and political system, and large
swathes of our culture and history, have been built.

So why are the basics of Western Civilisation absent from the national curriculum? 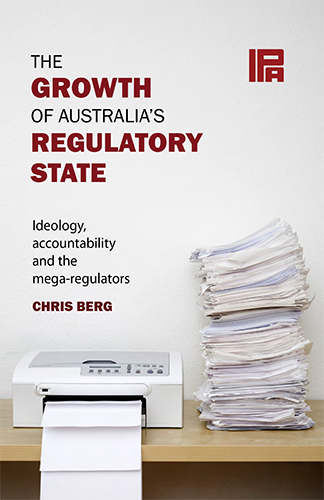 Introduction: Regulation is a political activity. It sets the framework for the market economy by defining the boundaries between private action and government action. It is, since the failure of overtly socialist models of political economy, the primary method by which the government relates to individuals and communities.

Regulations, and the regulatory agencies which administer them, cast an increasingly large shadow over the freedom to interact, both economically and socially, in Australia.

The first part of this IPA Backgrounder looks at the rapid growth in regulation-making, and the recent institutional changes in Australia’s regulatory agencies. It charts the consolidation and expansion of the three major economic regulators — the Australian Competition and Consumer Commission (ACCC), the Australian Prudential Regulatory Authority (APRA) and the Australian Securities and Investment Commission (ASIC)—and examines the theoretical justifications for constructing such ‘mega-regulators’.

The second part attempts to explain how these mega-regulators are themselves able to encourage their own growth. It looks at the internal pressures towards regulatory and institutional expansion, as well as the political pressures which the agencies themselves are able to exert upon directly elected politicians.

Introduction: Is industry, in particular manufacturing, characterised by market failure that demands government intervention? The recently appointed Shadow Minister for Industry, Innovation Science and Research, Kim Carr has argued it is:

Industry policy is about addressing market failure … Clearly the reliance on market fundamentalism is not working. In the last five years we’ve seen the loss of nearly 40,000 jobs in manufacturing.

The Leader of the Opposition has similarly argued that Australia risks being relegated to the positions of ‘China’s quarry’ and ‘Japan’s beach’. In other words, the majority of Australia’s prosperity may become dependent on as few as two industries, tourism and mining, with a single buyer for each. Such a situation, it is implied, will provide a poor base for Australia’s future economic prosperity. Australia therefore requires a ‘sustainable economy’ buttressed by a diverse range of industries (a ‘broad economic base.’)

The Shadow Minister has also targeted low-end service industries as an example of what ALP industry policy will avoid, arguing that Australian employment cannot be restricted to ‘burger flippers’ and ‘cappuccino makers’. This constitutes an extraordinary slight on those workers, and indeed on all low-skilled workers. This type of job-snobbery is entirely inappropriate for an elected representative. Such a view also ignores the fact that these jobs are typically entry-level positions, as employees go on to higher level, higher skilled and higher paid positions either internally or externally.

Reflecting on the claim that Australia’s extractive industries provide an unsustainable base for economic prosperity, the Opposition Leader and Shadow Minister for Industry have signalled their intention to rejuvenate Australia’s ability to ‘make things’. This call for ‘reindustrialisation’ is a return to leftist ideas of the 1980s.

Australia has a long and disgraceful history of protectionism; high tariffs, the ‘White Australia Policy’ and highly regulated labour markets were some of the tools employed as part of previous industry policies. The state socialism, which characterised Australia’s political economy for much of its history, drained the nation of much of its natural wealth.

Instead of these ‘old-fashioned’ measures of an industrial policy, the Federal Labor Party proposes a new brand of industry policy. The Shadow Treasurer Wayne Swan says ‘Industry policy means to me getting the basics right — skills, education, innovation, infrastructure and tax’. Senator Carr has indicated a more expansive program, including measures such as utilising government procurement policy to provide a ‘base level of demand’ for Australian products.

Introduction: Reform to the regulatory framework of the Australian media should be unambiguously directed towards liberalisation of the sector. It is important to place the relatively recent, and highly publicised changes in production, distribution and consumption of media made possible by communications technology in a context of long term and continuous radical media change. Technological and commercial innovation have provided Australians with a multitude of choice over the content we consume, the way we receive and display it, and our capacity to store it for future consumption. Not only this, but the cost of production has rapidly dropped for seemingly mature industries like print, which has allowed niche and specialist publications to flourish. Never before have Australians had access to so much information packaged in so many formats.

Introduction: The Australian media is heavily regulated by a wide range of legislation and industry codes. Ownership, content, structure and reach are all subject to government interference. These regulations are complemented by numerous government interventions and subsidies – film financing, public broadcasting, arts grants, tax concessions. The Productivity Commission report into broadcasting services argued that the current approach ‘reflects a history of political, technical, industrial, economic and social compromises. This legacy of quid pro quos has created a policy framework that is inward looking, anti-competitive and restrictive.’

The regulatory and subsidy labyrinth has been a recipe for inefficient and inequitable outcomes. It represents failures in Australian governments’ attempts to manage the introduction of new technologies and services, to foster‘diversity’ and equal access and unnecessary measures to prevent monopoly.

Relatively recent far-reaching technological changes in media content production and delivery have exacerbated the adverse efficiency effects of this unsatisfactory policy progression. The upshot has made it more urgent to implement a major adaptation of the sector’s regulatory framework. As the Institute of Public Affairs has long been involved in the economic, social and political debate over media and communications policy, we welcome the chance to comment on the government’s media reform discussion paper in the light of these developments.

Introduction: Australian spectrum policy is largely characterised by a ‘command and control’ approach to allocation. Government allocates rights, conditions of their use, and the services which may be provided. Such rights can rarely be traded, and are subject to continuous government supervision and regulation. Such a top-down approach is ill-suited to managing the implementation and diffusion of technological innovations, nowhere more so than in the field of communications and information technology. While such a framework may satisfactorily – although certainly not ideally – manage a limited and static array of services, its capacity to manage the allocation of new and future technologies is limited.