Let’s briefly grant critics of ‘neo-liberalism’ their preferred terminology. Are Australia’s governments entranced by dreams of a neoliberal utopia?

‘Neo-liberalism’ has become commentariat dogma on both the left and the right. As any number of opinion pieces describe, Margaret Thatcher and Ronald Reagan engaged in privatisation and deregulation on a massive scale, fuelled by ideological zealotry. In Australia, Prime Ministers Hawke and Keating did the same, but in contrast to their Atlantic allies, they exhibited the measured and reasonable approach that could only be grounded in Treasury advice.

By the late 1990s, after a decade of continuous economic reform across the country, Australian governments had, sometimes reluctantly, handed their role in the provision of services to the private sector. Neo-liberalism, we read, rules the day.

But this reading of the form and function of Australia’s system of government is deeply incomplete. Instead, in 2007, the best characterisation of Australia’s political system is not a neo-liberal, ‘nightwatchman’ state, nor is it the social-democratic welfare state which dominated the twentieth century. Rather, it is a ‘Regulatory State’.

The Regulatory State shares elements of these traditional political models. Like the former, it has an economy relatively open to foreign capital and products. It has privatised most of its publicly-owned monopolies. And like the latter, Australia has a large welfare state, as well as extensive government provision of health and education services.

Australia is not, however, merely at a mid-point between liberalism and socialism. The phrase ‘Regulatory State’ indicates a separate alternative — the regulation of our economic and social life has come to be the primary activity of government, and the primary means by which government interacts with the economy and the individuals who comprise it.

In a Regulatory State, not only is regulating the first priority of the state, but regulation defines the state. It is a revealing way of analyzing Australian democracy.

Regulation governs our commercial interactions. It governs the work environment, the social environment — reflect for a moment on how many regulations there are by which you are suddenly administered the moment you walk into a bar — and the home environment.

From a historical perspective, regulation acts as a substitute for public ownership. The privatisations which critics of neoliberalism have fixed upon as indicative of a laissez-faire economy have been matched with a correspondingly dramatic increase in legislation and subordinate legislation to control these newly private entities. The Regulatory State has found that its social, environmental and economic purposes can still be achieved by the use of regulation, while avoiding the burden of actually owning, and being responsible for, the public utilities themselves.

The modern left’s primary criticism of privatisation is that private ownership will not deliver the social benefits that public ownership had (or could have). And yet no state business has been privatised without being saddled with an extensive regulatory programme aimed at trying to keep those benefits?

One exception to this is the padded workforces of the former state government trading entities. Privatisation — and its diluted form, corporatisation — has been fundamentally about forcing efficiencies by shedding labour. This willingness to jettison excessive, unionised jobs itself says much about the ideological progress of social-democratic parties. But job shedding in these former state entreprises has been accompanied by the creation of jobs in production management, as well as regulatory and governance jobs.

Almost all of the growth in regulation under the modern Regulatory State is social, rather than economic.

Environmental regulation has a long history, but its marked rise in the last quarter of a century was inaugurated by the 1972 Stockholm Conference on the Human Environment and the subsequent establishment in many nations, including Australia, of national environmental agencies. Consumer product safety, particularly in the transport sector, and Occupational Health and Safety regulations have also increased rapidly. Corporate and financial regulation has also displayed particular growth, often mandated by parallel international trends, but also propelled by what former British Prime Minister Tony Blair has described as an increasingly risk-averse population.

Charts 1 and 2 show just how dramatic this increase in regulatory and legislative activity has been. The impact of these regulations is cumulative — firms and individuals have to comply with the total body of law, not merely the law that has been passed in the most recent session of parliament. Certainly, much law is passed to override or amend existing legislation, but that in itself constitutes a further cost. 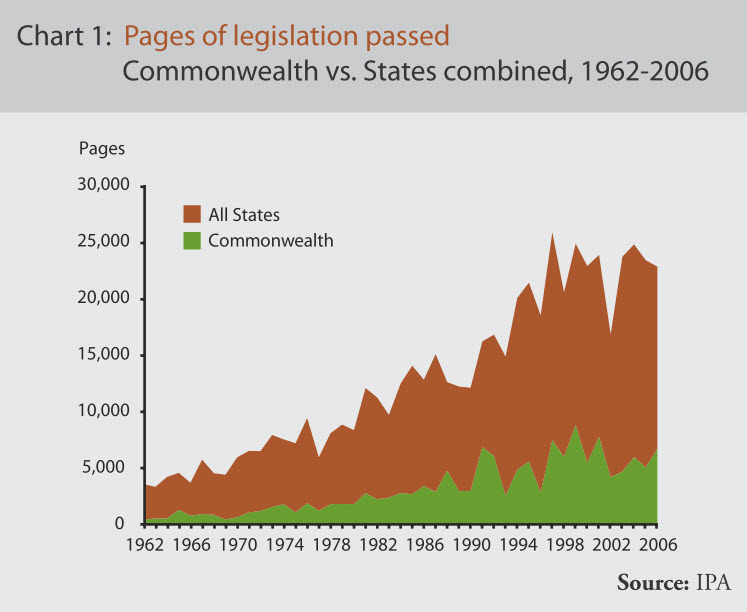 Furthermore, these charts do not include the web of quasi-regulations, codes of conduct, guidelines and other ‘voluntary’ self-regulations, which are often policed by regulators, or developed by the government, or instituted to ward off potential legislation. It would be a mistake to ignore these much-harder-to-quantify interventions when trying to ascertain just how significant regulation is in Australia. 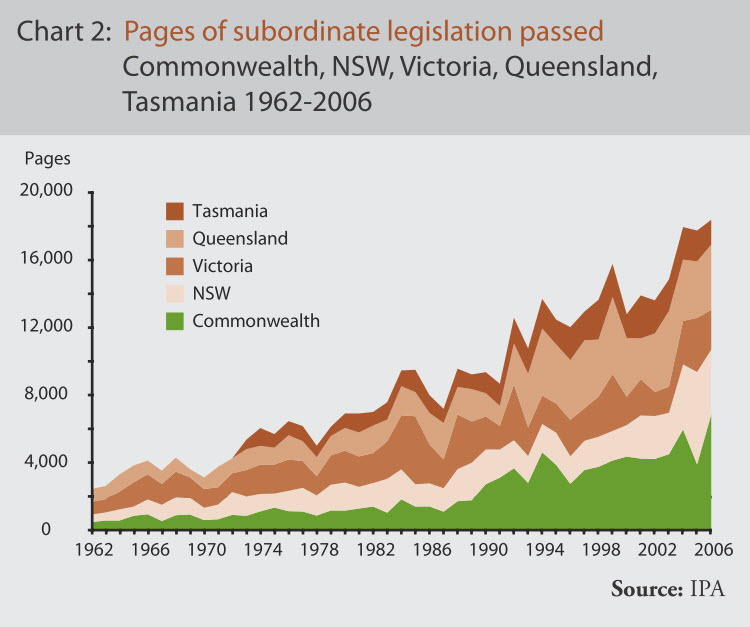 Using the direct tools of legislation, or the indirect tools of subordinate legislation and quasi-regulation, government intervention in the economy is expanding, rather than, as left-wing critics would describe it, receding. Furthermore, regulation has assumed a sort of entrepreneurial role for government intervention—a mechanism to search out new areas of the economy just begging to be regulated.

This casts Australian governments’ enthusiastic regulatory activity in a new light. The development of regulation is unambiguously a political activity whose direction is determined by political imperatives, and which has just as many political consequences as it has economic and social consequences.

The direction of regulation may be determined by elected legislators, but its administration is delegated to the central institution of the Regulatory State — the independent regulatory agency.

These institutions are deemed ‘independent’ because they exist outside the normal bureaucratic chain of accountability — ministers and other elected representatives are not directly responsible for the agencies’ actions.

Independent regulators are accountable through such indirect means as procedural norms, requirements to be ‘transparent’, jurisdictional limitations and, as a last resort, the right of aggrieved firms and individuals to judicial review of the regulators’ decision-making processes. Nevertheless, within the confines of these mechanisms of accountability, regulators have significant discretionary power.

While the United Kingdom had inspectors policing factories for violations of the Factory Act from 1833, the independent regulatory agency is largely an American invention. The socialist fetish for public ownership never took strong hold in the United States, but, pioneering the now familiar pattern, regulation administered by independent regulatory agencies provided a substitute. In 1887, the Interstate Commerce Commission was formed, followed quickly by the Food and Drug Administration (1906) and the Fair Trade Commission (1913).

Then, as now, independence was intended to protect objectivity — the regulators would be friendly to business, but neutral in their application of the law.

But this balanced objectivity has also been under-mined historically by the bureaucratic impulses of the independent regulator to expand its jurisdiction, its powers and its discretionary budget. Regulators lobby governments for increased regulations, increased powers to administer them and, of course, increased budgets and staff. Regulators involve themselves more deeply in the activities of the firms they regulate, trying to discern the levels of compliance while, at the same time, trying to expand their jurisdiction into other industries and sectors.

For instance, having decided that the free-for-all internet is littered with bottlenecks to genuine competition, the ACCC is using the migration of media content online to explore new opportunities for regulation — a textbook example of regulatory creep.

Doing a similar extrapolation for the budgets of those agencies, and taking into account government departments with regulatory functions, inter-governmental bodies, and the range of quasi-official agencies and boards, it is easy to imagine that at least $10 billion is spent on regulating our activities.

Reigning over this web of institutions that is the Regulatory State are three ‘mega-regulators’ — the Australian Prudential Regulation Authority (APRA), the Australian Competition and Consumer Commission (ACCC) and the Australian Securities and Investment Commission (ASIC) — the results of a concerted effort over the last decade-and-a-half to consolidate federal and state regulatory agencies into single, one-stop-shop regulators.

Rather than having their jurisdictions delineated by the industries they regulate, instead they are delineated by the regulator’s ‘function’. ASIC is responsible for consumer and investment protection in cases of market manipulations such as insider trading. APRA is responsible for the regulation of information asymmetries in financial services, and the ACCC is responsible for anti-competitive conduct and consumer protection economy-wide. Old industry-based regulators, such as the Insurance and Superannuation Commission, had their functions divvyed up into the new functional bodies.

Just as the volume of regulation is growing, so are the three ‘mega-regulators’. We can see, since the turn of the twenty-first century, a significant increase in government spending and staff. We see increased media profiles and public relations activities. (The ACCC’s activism in the media was the subject of much criticism during the 2003 Dawson Inquiry into the Trade Practices Act — chastened, it decreased those activities immediately following the Dawson report, but has been steadily returning to its former levels.)

These agencies preside over the most intense period of regulatory and legislative activity in Australian history. This gives them enormous political power and influence — for which they are largely seperate from the traditional chains of democratic accountability.

Regulation, admittedly, doesn’t get much good press. But the criticisms that regulations do receive are revealingly narrow.

But the content of ALP policy focuses on reducing ‘red tape’ — only a small part of the total regulatory burden. Eliminating ‘duplication’ or regulatory confusion, which constitutes the bulk of ‘deregulatory’ proposals by both the ALP and the Coalition Government, does not address the real issue — regulations which discourage investment and entrepreneurial activity, and divert firms away from profit-making opportunities.

For example, Telstra estimates that it has to provide the government with 486 compliance reports annually — a significant red tape, or ‘paperburden’ cost. But the real cost of regulation of the telecommunications sector, however, is much higher, constituting the forsaken investment in infrastructure, the cost of universal service obligations, and the cost of delayed innovation across the economy. Similarly, the tomes of compliance reports required by ASIC dwarf the less tangible costs of diminished entrepreneurship and reduced corporate flexibility.

Focusing only on the paperburden cost of regulations is like focusing on the time spent filling out a tax return rather than the amount of tax paid.

In fact, the anti-red tape movement is reminiscent of regular movements throughout the twentieth century for more ‘efficient’ government. An efficient government is not a virtue if it is just as large as an inefficient one — indeed, efficiency can help it dominate the economy even more.

The bipartisan red tape proposals do nothing to reduce the size of government and its impact on the economy. Promises to reduce the red-tape burden offer little if they are not a constituent part of a promise to decrease the scope or extent of regulatory interventions.

A reduction in the volume of regu-lations and the extent of regulatory intervention in the economy will not only have economic benefits, it will have democratic benefits as well.

The dominance of the indepen-dent regulatory agencies in political and economic life is dependent upon this enormous pool of legislation and regulation — the problems of accountability and discretionary power will be resolved only when that pool is drained.

Regulation is the defining feature of the modern Australian state, and the regulatory problem requires a political solution.