Will governments adopt their own cryptocurrencies? No.

In fact, cryptocurrencies will make fiat currency better for its users — for citizens, for businesses, for markets. Here’s why.

Why do we have fiat currency?

Governments provide fiat currencies to finance discretionary spending (through inflation), control the macroeconomy through monetary policy, and avoid the exchange rate risk they would have to bear if everybody paid taxes in different currencies.

As George Selgin, Larry White and others have shown, many historical societies had systems of private money — free banking — where the institution of money was provided by the market.

But for the most part, private monies have been displaced by fiat currencies, and live on as a historical curiosity.

We can explain this with an ‘institutional possibility frontier’; a framework developed first by Harvard economist Andrei Shleifer and his various co-authors. Shleifer and colleagues array social institutions according to how they trade-off the risks of disorder (that is, private fraud and theft) against the risk of dictatorship (that is, government expropriation, oppression, etc.) along the frontier.

As the graph shows, for money these risks are counterfeiting (disorder) and unexpected inflation (dictatorship). The free banking era taught us that private currencies are vulnerable to counterfeiting, but due to competitive market pressure, minimise the risk of inflation.

By contrast, fiat currencies are less susceptible to counterfeiting. Governments are a trusted third party that aggressively prosecutes currency fraud. The tradeoff though is that governments get the power of inflating the currency. 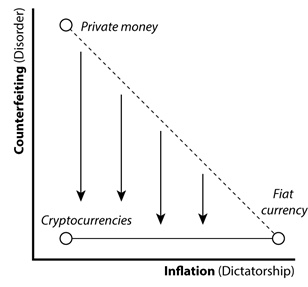 The fact that fiat currencies seem to be widely preferred in the world isn’t only because of fiat currency laws. It’s that citizens seem to be relatively happy with this tradeoff. They would prefer to take the risk of inflation over the risk of counterfeiting.

One reason why this might be the case is because they can both diversify and hedge against the likelihood of inflation by holding assets such as gold, or foreign currency.

The dictatorship costs of fiat currency are apparently not as high as ‘hard money’ theorists imagine.

Cryptocurrencies are a form of private money that substantially, if not entirely, eliminate the risk of counterfeiting. Blockchains underpin cryptocurrency tokens as a secure, decentralised digital asset.

They’re not just an asset to diversify away from inflationary fiat currency, or a hedge to protect against unwanted dictatorship. Cryptocurrencies are a (near — and increasing) substitute for fiat currency.

This means that the disorder costs of private money drop dramatically.

So why have fiat at all?

Here we see the rational crypto-expectations revolution. Our question is what does a monetary and payments system look like when we have cryptocurrencies competing against fiat currencies?

And our argument is that it fiat currencies will survive — even thrive! — but the threat of cryptocurrency adoption will make central bankers much, much more responsible and vigilant against inflation.

Recall that governments like fiat currency not only because of the power it gives them over the economy but because they prefer taxes to be remitted in a single denomination.

This is a transactions cost story of fiat currency — it makes interactions between citizens and the government easier if it is done with a trusted government money.

In the rational expectations model of economic behaviour, we map our expectations about the future state of the world from a rational assessment of past and current trends.

Cryptocurrencies will reduce government power over the economy through competitive pressure. To counter this, central bankers and politicians will rail against cryptocurrency. They will love the technology, but hate the cryptocurrency.

Those business models and practices that rely on modest inflation will find themselves struggling. The competitive threat that cryptocurrency imposes on government and rent-seekers will benefit everyone else.

It turns out that Bitcoin maximalists are wrong. Bitcoin won’t take over the world. But we need Bitcoin maximalists to keep on maximalising. The stability of the global macroeconomy may come to rely on the credible threat of a counterfeit-proof private money being rapidly and near-costlessly substituting for fiat money under conditions of high inflation.

Most discussion about the role of cryptocurrency in the monetary ecology has focused on how cryptocurrencies will interact with fiat. The Holy Grail is to create a cryptocurrency that is pegged to fiat — a so-called stable-coin (such as Tether or MakerDAO).

But our argument is that the evolution of the global monetary system will actually run the other way: the existence of hard (near zero inflation, near zero counterfeit) cryptocurrency will tether any viable fiat currency to its hardness. No viable fiat currency will be able to depart from the cryptocurrency hardness tether without experiencing degradation.

This in effect tethers fiscal policy — and the ability of politicians to engage in deficit spending in the expectation of monetising that debt through an inflation tax — to the hardness of cryptocurrency.

The existence of a viable cryptocurrency exit tethers monetary and fiscal policy to its algorithmic discipline. This may be the most profound macroeconomic effect of cryptocurrency, and it will be almost entirely invisible.

Cryptocurrency is to discretionary public spending what tax havens are to national corporate tax rates.