Abstract: Liberalism is a philosophy of political economy that offers enduring principles about how we should seek to interact in groups and in human society more generally. Far from being outdated or archaic, those principles offer more convincing and powerful responses to our current challenges than any competing philosophy. While populism claims to offer straight-forward solutions to some of the difficulties of globalisation, it offers only half-hearted remedies for weaknesses in the operation of representative democracies, and populism has little capacity to reckon with the wave of technological changes set to revolutionise the global economy. Liberalism, by contrast, is uniquely suited to clarify and tackle these challenges. It offers coherent responses to globalisation, dissatisfaction with representative institutions, and technological change. This is not to say that all is well in the house of liberalism. There is an opportunity, if not to reconstruct, then to refresh and retarget liberal thinking on these issues.

Australia has a rich heritage of nineteenth century classical liberalism. But that history has been almost completely lost in the flood of historical work focusing on either federation or the labour movement. Zachary Gorman’s new biography of Sir Joseph Carruthers, the nineteenth century free trade liberal and founder of the Liberal party of New South Wales, helps balance the ledger – recovering the tradition of free market liberalism that has been so significant in Australian history.

In many ways, Joseph Carruthers embodies that tradition, with its strengths and flaws. In the colonial era liberal political thought was one of the dominant strands of public life, and Carruthers’ career reflected its dominance. Born in 1857, he entered NSW politics in 1887. Carruthers was a father of federation, a minister under Henry Parkes and George Reid, and after the establishment of the Commonwealth became premier of New South Wales. He only left politics when he died in 1932.

Like his university friend George Reid, Carruthers was a great admirer of William Gladstone. He believed in balanced budgets, individual liberty, and that ‘we should encourage commerce in its freest sense’ (as he once informed a branch meeting of the Labour Electoral League).

Carruthers was a liberal, but not a radical one by the standards of the time. Gorman positions him as a moderate, or pragmatic liberal within the free trade movement. On one side was Bernard Wise, whose support for free trade was matched with a pro-government intervention and regulation program. On the other side was the radical free market liberalism of Bruce Smith, whose 1887 book Liberty and Liberalism was a full-frontal attack on the left-liberalism advocated by people like Wise. A working politician has to satisfy multiple constituencies. Carruthers was no exception, balancing both liberal and conservative supporters, as well as managing coalitions with the progressives.

Histories of political life can sometimes be a little deadening. Much drama in politics consists of a stream of legislation and amendment, which can be both complex and (in the hands of poor biographers) dull. Gorman does not fall into this trap: he is able to very clearly explain the significance of each well-chosen controversy in a way that makes the relevance to liberalism and Carruthers’ life obvious.

Gorman is also sensitive to instances of where Carruthers’ thought deviated from classical liberal ideas. These are worth detailing, because classical liberals have not always lived up to their underlying belief in the inherent equality and political dignity of all people. One philosophically minor but historical significant example was temperance. His father had struggled with alcohol and was ultimately involved in the temperance movement. Likewise many of the Liberal party voters were motivated by temperance. Gorman writes that Carruthers believed ‘liberalism could bend on this issue’. Carruthers ended up supporting the so-called ‘local option’ which handed the regulation of liquor licences to electorates and municipalities – not always a win for liberty.

More serious to modern readers was Carruthers’ opposition to female suffrage, for which he believed the case had not yet been made. His was perhaps a half-hearted opposition, and he later supported the suffragette movement in Britain when he visited there in 1908. But his stance compares poorly with some contemporaries like Bruce Smith, who actively called for universal suffrage in Australia.

Carruthers’ attitude to immigration presents a similar story. While being supportive of high immigration levels, he also backed the white Australia policy on the grounds that a multiracial society could harbour ethnic tensions. This view changed when he began to visit Hawaii, as he did regularly late in life. He saw there a society in which Americans, native Hawaiians, Japanese and Filipinos coexisted prosperously, helped in no small part by American free trade relationships.

Carruthers’ views were more admirable when it came to the relationship between colonists and the Indigenous population. As a child growing up in Macleay he had spent much time playing with Aboriginal children, and he maintained a sympathy with Indigenous people his whole life. He wrote later of the ‘ruthless indifference [of] the whites, who have invaded their homelands, bringing with them new diseases and vile habits, and sometimes unspeakable cruelties that have unnecessarily wiped out millions of so-called inferior and backward peoples’. Carruthers’ language often betrayed a paternalistic or patronising mindset but he was more wide-eyed than most about who bore the costs of colonialism.

For the most part, Carruthers was a needed defender of liberal values. During the First World War he refused to get too caught up with the anti-liberal sentiment of wartime Australia, and opposed the NSW government’s sedition bill (which had been mainly targeted at the labour movement).

This is not the first full length biography of Carruthers. Beverly Earnshaw published One Flag, One Hope, One Destiny: Sir Joseph Carruthers and Australian Federation in 2000, which as its title suggests finds interest in Carruthers because of his federation role. (Carruthers’ own memoirs also received commercial publication in 2005.) But for Gorman, Carruthers’ greatest legacy is the New South Wales Liberal party, which he views as one of the crowning organisational achievements of nineteenth century liberalism. While it has repeatedly changed its name, the NSW Liberal Party is still, organisationally, the same entity today as the one Carruthers established as the Liberal and Reform Association in 1902.

For modern classical liberals the post-Federation decade has a somewhat melancholy tone. The rise of the Labor party led to an alliance, and then fusion, between the free traders and protectionists under the banner of anti-socialism. Gorman’s book both adeptly navigates this history, and, with his picture of nineteenth century liberalism, underlines just what we lost.

Abstract: How did 19th century Australians think about liberalism, economics and political economy more generally? Nineteenth century Australia has been described variously as having a ‘neoclassical’, enlightenment, or Benthamite political culture. This paper provides an empirical approach to the question of early Australian ideas. Exploiting the records of 1891 book sales and auctions in Australia between 1800 and 1849, the paper examines the relative prevalence of key economic, political and liberal texts available to 19th century Australians. The works of classical enlightenment authors such as Adam Smith and John Locke were far more prevalent, and more likely in demand, than those of Jeremy Bentham. To the extent utilitarian ideas were prevalent, they were more in the form of William Paley’s conservatism than Bentham’s radicalism. 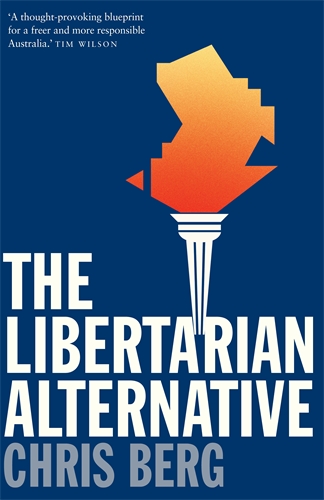 Libertarianism offers surprising new solutions to stagnant policy debates over issues such as immigration and civil rights, and provides a framework for tackling contemporary problems like privacy, the environment and technological change.

In The Libertarian Alternative, Chris Berg offers a new agenda for restoring individual liberty in Australia, revitalising politics and strengthening our sagging economy.