The document has become an icon of liberty, variously credited with establishing everything from parliament to the rule of law. It is such a fixture of popular political thought that it is still rhetorically powerful eight centuries later. The Abbott Government’s proposed citizenship law changes have been widely condemned as a violation of its principles.

This is strange for something so archaic. The Magna Carta consists of about 3000 words of 13th century legalese about inheritance, feudal payments, land tenure and customary rights, in Latin, reflecting the economic and political concerns of a world distant from our own.

There’s one simple reason that the Magna Carta became the document of individual rights and a check against power that it is today.

Most commentary on the document is written by lawyers looking for the origins of the English common law and rights like habeas corpus. This means delving through the complexities of medieval land law and legal systems.

Yet the vast majority of the provisions of the Magna Carta are specifically designed to limit how much tax the king can take from his subjects. As the historian David Carpenter writes, the document was “above all about money.”

If our liberties can be traced back to the Magna Carta, then it is in resistance to tax that they were forged.

By 1215, King John had spent 10 years soaking England for as much revenue as he could in order to reclaim his family’s European possessions.

John’s royal family had presided over an empire that stretched from Ireland to the French-Spanish border. But John had lost much of the continental empire shortly after taking the throne in 1199. John needed money to build an army to recapture his patrimony.

He levied feudal dues far beyond what Englanders were used to, ramped up customary legal charges, sold privileges and otherwise grabbed opportunistically at the wealth of the kingdom. Some historians have described John’s fiscal approach as “asset stripping” England.

John eventually invaded Europe in 1214. But he lost. This defeat sparked a civil war in England. The barons, a tiny, extremely rich sliver of the population, were sick of paying for John’s futile foreign adventurism.

The Magna Carta was supposed to be a peace treaty between the king and the barons. Hence, the shopping list of provisions that constrained the king’s revenue collection.

But it is one thing to write rules about what government may lawfully do; it is quite another to enforce them.

The Magna Carta did not invent parliament. Parliament-like bodies appeared in England several centuries earlier. But the Magna Carta gave parliament its purpose – and its leverage over the monarchy. One provision stated that feudal charges could only be imposed “except by the common counsel of our realm”. This rapidly became a political norm whereby the parliament had to approve any requests for new tax.

For centuries the English parliament used the threat – sometimes implicit, sometimes explicit – of withholding funds to carve out more power against the monarch.

Over time this evolved into a basic assertion of political equality. The cry of “no taxation without representation” was used by the American revolutionaries and the 20th century suffragettes alike.

Now, the tax revolt that led to the Magna Carta was a revolt of elites, not the general population. And in many ways what the barons won in 1215 enhanced their position in comparison to everybody else.

Obviously, the mere existence of parliament is no guarantee of liberty. A rebellion in 1381, the Peasant’s Revolt, was sparked by parliament’s predatory introduction of a poll tax. The elites that controlled parliament were happy to impose repressive taxes on those below them.

There was no Magna Carta after the Peasant’s Revolt. The rebels were massacred. Yet it wasn’t until 1989 that an English government attempted to introduce a poll tax again, and that time it led directly to Margaret Thatcher’s downfall.

There’s a tradition of history, derided as ‘Whig history’, in which the past is studied firmly with an eye on the present. In this tradition, the practice of history consists primarily of identifying the origins of contemporary practices and institutions, skipping over what makes the past alien and different – the historical dead ends and forgotten beliefs.

The Magna Carta holds a preeminent place in Whig histories as the source of English freedom. And not wrongly, either. Because those obscure Latin clauses became, in the hands of propagandists and revolutionaries decades and centuries after June 1215, a document symbolising general limits on royal power.

Anachronistic misunderstandings of the Magna Carta were themselves a force for liberal progress.

So to celebrate the Magna Carta is to celebrate 800 years of its history, not the specific rules it imposed about, for instance, the receipts of an estate’s earnings while it was held in wardship.

It is to celebrate how this strange, failed peace treaty established a permanent relationship between tax resistance and political freedom in the English-speaking world. 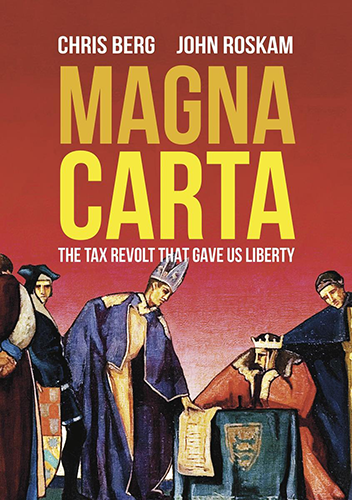 ‘Our liberty, democracy, and human rights are all in some way related to what was inscribed on parchment at Runnymede in June 1215’

The Magna Carta is a founding document of individual liberty, rule of law, and parliamentary democracy. In this accessible and engaging book, Chris Berg and John Roskam explain what the Magna Carta is, where it came from, and why it matters.

The barons demanded of King John nothing less than a wholesale revolution of government. The Magna Carta establish the fundamental link between tax and consent.

Eight centuries later, understanding how our liberties came from a revolt against oppressive taxation has never been more important.

Available from the Institute of Public Affairs and Amazon.com